In cooperation with the University of Southampton Centre for Underwater Archaeology, headed by Dr Lucy Blue, we were able to organize the first systematic underwater research of locations on our coast. The project began under the name “Rescue Underwater Heritage of Montenegro-Maljevik 2010”.

In cooperation with the University of Southampton Centre for Underwater Archaeology, headed by Dr Lucy Blue, we were able to organize the first systematic underwater research of locations on our coast. The project began under the name “Rescue Underwater Heritage of Montenegro-Maljevik 2010”. Initial preparation for the project, which included Maljevik, a bay near Sutomore, and Bigovica, a bay located near the port of Bar, was followed by financial support from a great sponsor of archaeology, Lord Sainsbury, and his Hedley Foundation Trust. This allowed for the project to move from preparation towards concrete implementation. 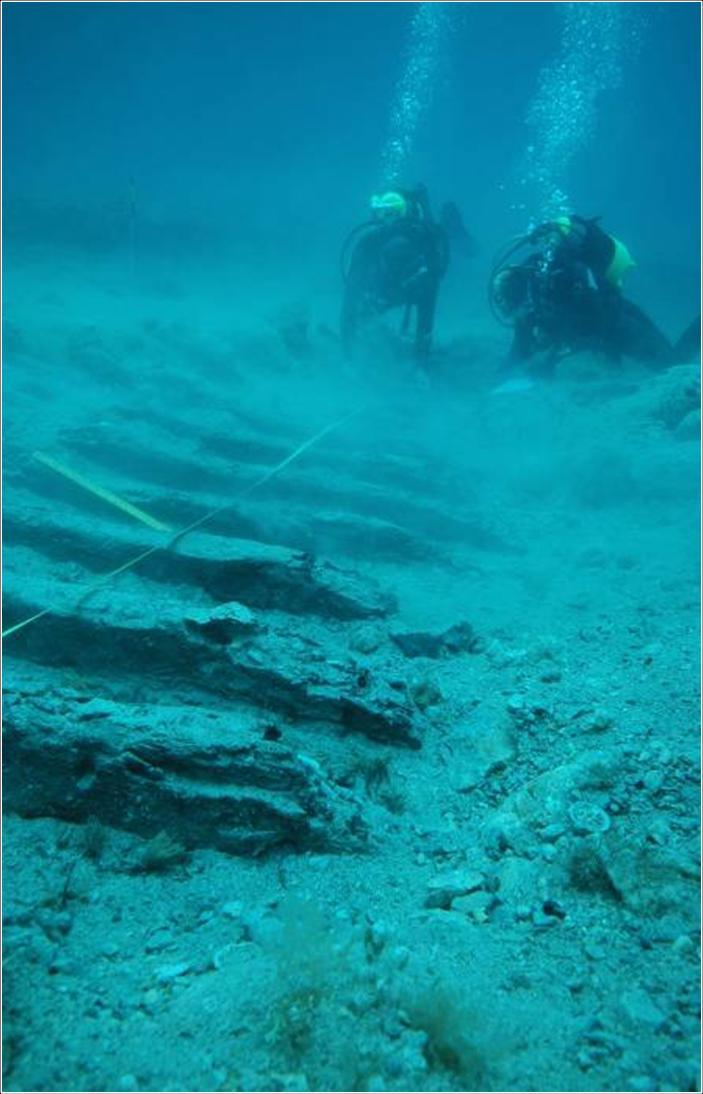 A team gathered by Southampton University, including Dr.Lucy Blue (UK), Dr. Athena Trakadas (UK) museum curator at the Viking Museum in Denmark, Matt Dawson (USA) archaeological photographer and doctoral student of the university, Dr. Ania Kotarba-Morley (UK), Master students Angela Rodriguez (Colombia), Anya Rutter (Germany), Quinn Saint Amand (USA), Charles Le Quesne (UK) from RPS company, and Mike Morley (UK) geologist and Oxford professor. Of course one of the objectives was to establish a team of archaeologists and archaeology students from Montenegro, because the study was based on training of our students in the field of archaeological diving and mastering the methodology of underwater research. Thus was formed the first underwater archaeological team in the history of archaeology in Montenegro, sponsored by the Public Cultural Center-Museum Bar, which consists of: Dejan Draskovic, Petra Zdravkovic, Ivana Medenica and Mladen Zagarčanin as archaeologists- divers, and Nikola Borovinic, a student of archaeology. 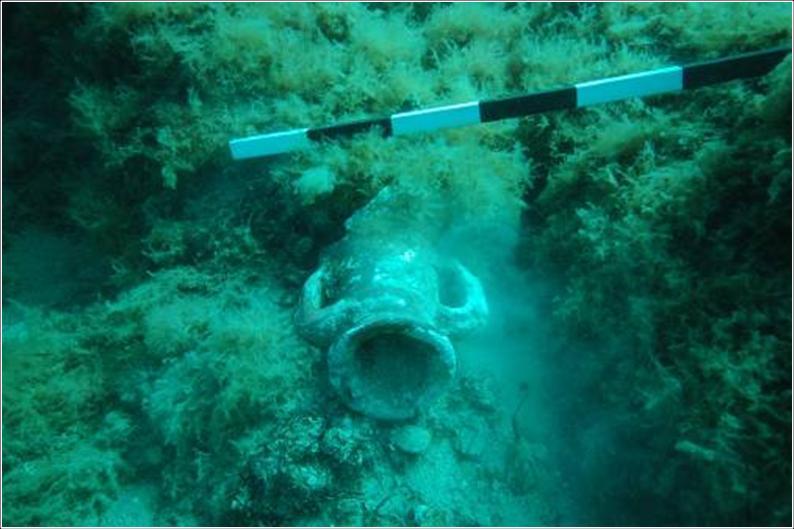 At first, it seemed almost impossible to find adequate logistics that would function at the state level, and which would enable us to overcome the perhaps more serious obstacle than the lack of technical resources, which are administrative problems with permits for diving and research. In this part of the project, with the help of the Diving Association of Montenegro and its representative Vanja Milosevic. We received great financial support from the Ministry of Culture of Montenegro. It covered various expenses related to diving, accommodation, and equipment.
However, the project could not be conducted as planned if it wasn’t for the dive center SCUBAQUEST, dive boat Downunder, and its owner Zeljko Dragutinovic. From the moment we contacted SCUBAQUEST the whole project became a surreal and beautiful archaeological adventure. On board for 12 days, we had all the necessary equipment, the possibility of working in enclosed and protected conditions, with the use of a kitchen and toilets and most important of all, we had comfort that enabled us to enjoy our work and relax after diving. Also, all technical logistics were conducted on Downunder, and some of our archaeology students completed their dive course there prior to the beginning of the project.
Željko’s assistant Milan Anicic was also a great help, always available to assist the experienced as well as inexperienced members of the team.
In 12 days of diving, we spent on average 22 hours underwater each, which yields about 180 hours of archaeological research. Sometimes we had to do up to 3 dives per day, which was very exhausting for some of us not used to extensive diving.
The first part of the research was solving the Maljevik enigma. Where did these semi-fabricated antique architectural elements come from? Is it a shipwreck or remains of the village where they were produced? The research has included a soil and an archaeological survey, as well as reconnaissance of the coast. According to the data gathered so far, we came to the following conclusions:
The primary site is divided into two parts, involving two groups of architecture elements ten meters apart, consisting of four and two pieces. Without a doubt, the stone is of local origin. There are indications that it was carved right on site. Depression of the soil is up to 4 meters; therefore the site is, in archaeological terms, “in situ”. That means that the level of the coast from ancient times sunk and that today’s picture does not reflect the geological situation of the Roman period. A large number of loose archaeological material was not found. From the time it was first published that the remains of some sort of building were found in Maljevik, a lot of archaeological material was removed from shallow waters around the site and towards the shore. Maljevik quickly became a target for “explorers”. A number of them have shifted their theories of the existence of Troy to this location!
The secondary part of the research was to examine the bay of Maljevik. At the south entrance to the bay, the remains of two petrified ancient shipwrecks were found. The larger one was known from before, and after being devastated by amphora thieves over the years, is no longer relevant. The second has a large number of fragments that we would not be able to identify if it wasn’t for pieces of the amphorae bottoms that proved to be from 1st and 2nd amphora, known as Bridizi type. This ship broke apart on a rock, and spilled its cargo directly below it, in an area of 10 sq. meters. Another type of amphora fragment was found in the vicinity of the same rock. According to the structure and morphological characteristics of the fragments it can be said that they originate from North Africa and are from the 4-5 centuries. 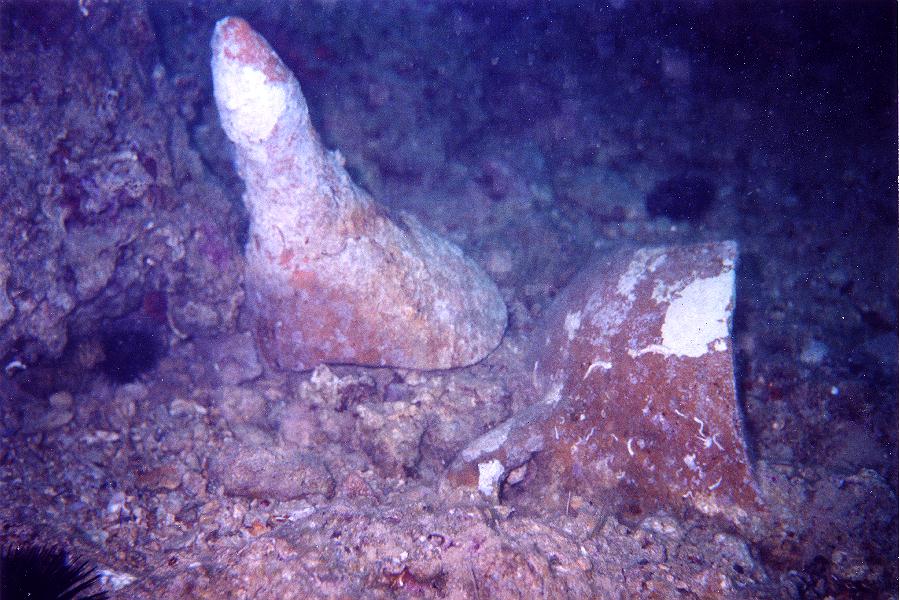 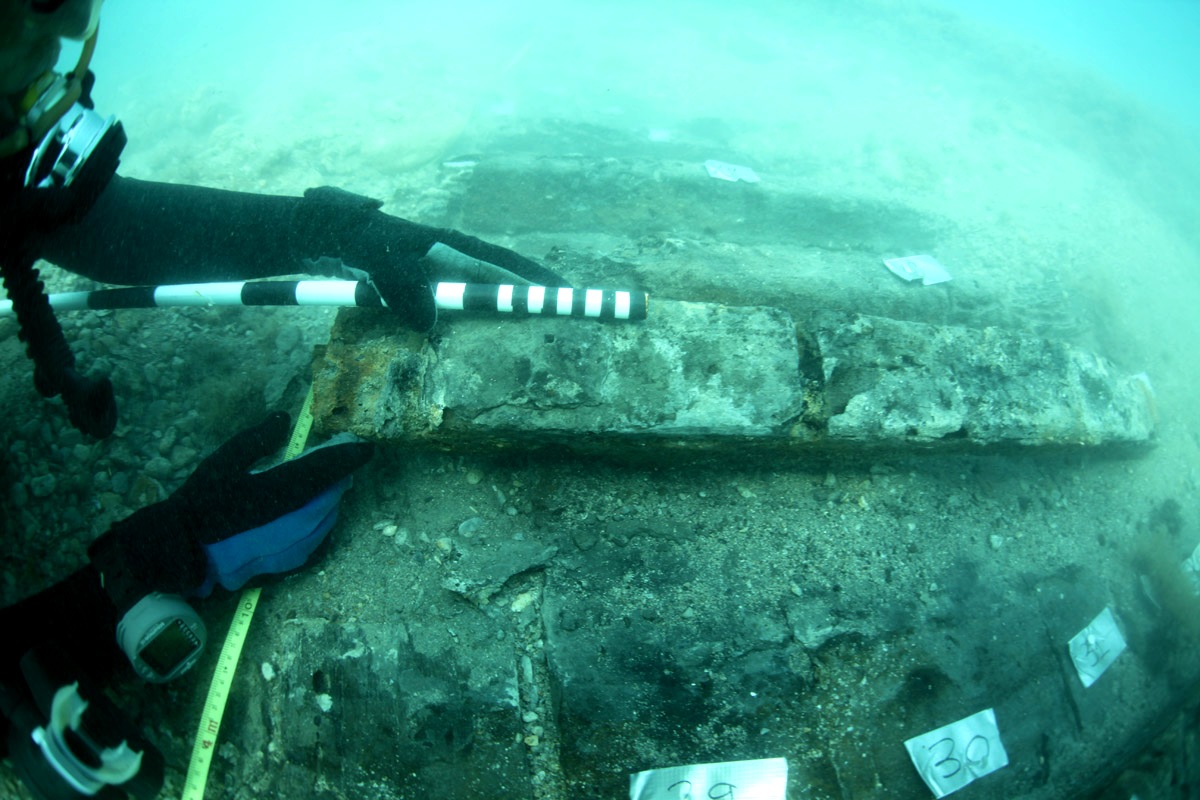 Bigovica is a completely different type of site. It is one of the most interesting places to study archaeology of small emporiums and, judging by the number of amphorae types, this is perhaps the richest site on the eastern Adriatic coast. Amphora typology ranges from 3rd century BC, and follows almost all ages, ending up to about 15th century. Fragments were found from nearly all famous Mediterranean workshops, among which are Italo-Greek types, Dressel 1 and 2 and Dressel 6B and E ,as well as North Mediterranean Late Roman 1 and 2, almost all major North African production, Byzantine amphorae from 6th to 13th centuries, and more— much more. As with the studies at Maljevik, geological and sediment samples were taken. Reconnaissance of a broader area around the bay was done. Evidence of fortifications was found, which supports the theory of the existence of a speculum (watch tower). Also found was a ramp used to offload cargo, carved at an angle into solid rock. This access enabled docking near the shore. In the vicinity, two large water recipients were found indented in the rock.
Ribs of an unknown boat or small wooden ship were found in Bigovica as well, which appears to be deliberately sunk. Piles of stones on the boat indicate that, prior to the sinking, the boat was loaded and then sunk. The discovery of a bullet from the Second World War near the wreck certainly cannot be used for dating the ship with certainty. Analysis using a C14 method will allow for better dating of the wreck.
This project should be continued and in 2011 to provide for expansion of the work in Bigovica and to explore other bays. The very fact that we are gradually getting a picture of the existence, positions, and characteristics of small ancient ports used for transportation of goods makes this kind of underwater archaeology very interesting. Study of the relationship between these emporiums an surrounding lands, based on the all available archaeological, geological, physical and chemical parameters will allow to better understand the historical trade transformations of the era, and to how geological changes influenced the way goods were transported from the Mediterranean. It is also very important to identify and catalog underwater archaeological material to be able to show the scientific community the existence of pottery and other items that are thought to be arriving only to large antique centers on the Adriatic.